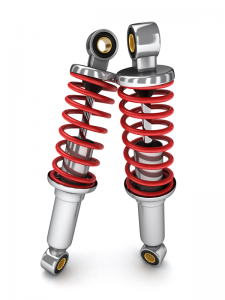 How do I know if my vehicle really needs new shock absorbers?

You need new shocks (and/or struts) if your original shocks (or struts) are worn out, damaged or leaking. Leaking is easy enough to see (just look for oil or wetness on the outside of the shock or strut) as is damage (broken mount, badly dented housing, etc.). But wear is often more of a subjective thing to judge. There are also instances where the original equipment shocks may not be worn, damaged or leaking, but may not be adequate for the job they’re being asked to do. In such cases, upgrading the suspension with stronger, stiffer or some type of special shock (or strut) may be recommended to improve handling, for trailer towing, hauling overloads or other special uses.

Shocks and struts do not require replacing at specific mileage intervals like filters or spark plugs, but they do wear out and

But when exactly a shock or strut needs to be replaced is hard to say. Because the damping characteristics of shocks and struts deteriorate gradually over time, the decline in ride control often passes unnoticed. So by the time you think you need new shocks or struts, it’s usually way past the point when they should have been replaced.

One way to evaluate your need for new shocks or struts is to consider how your vehicle has been handling and riding lately. Does it bounce excessively when driving on rough roads or after hitting a bump? Does the nose dip when braking? Does the body roll or sway excessively when cornering or driving in crosswinds? Does the suspension bottom out when backing out of the driveway or when hauling extra passengers or weight?

A “bounce test” is still a valid means of checking the dampening ability of shocks and struts. If the suspension continues to gyrate more than one or two times after rocking and releasing the bumper or body, your shocks or struts are showing their age and need to be replaced.

Weak shocks and struts won’t necessarily create a driving hazards if you continue to drive on them, but there are studies that show worn shocks increase the distance it takes to stop a vehicle on a rough surface. Increased body sway due to weak shocks or struts can also increase the risk of skidding on wet or slick surfaces.

Worn shocks and struts also increase suspension wear (though marginally) but can have an effect on tire wear.

The reason why most people decide to have worn shocks or struts replaced, however, is to improve overall ride quality. If you’re sick of bouncing and rocking on rough roads, a new set of shocks or struts will firm up your suspension and restore proper ride control.

If you’re interested in performance handling, you can upgrade to premium “gas” charged shocks or struts. These are charged with high pressure nitrogen gas to help minimize foaming in the hydraulic fluid inside the shock. This lessens “fade” on rough roads and helps the vehicle maintain better ride control when cornering.

There are also “heavy-duty” replacement shocks and struts that have larger diameter pistons than stock. These too, provide increases resistance for greater control — but may be a little too harsh for everyday driving. So some shocks have special valving or adjustable valving that allows the amount of resistance to vary.

Another option to consider if you tow a trailer or haul extra cargo are overload or air-assist shocks. Overload shocks have a coil spring around them to increase the load carrying capacity of the suspension (these also tend to ride stiffer than standard replacement shocks). Air-assist shocks have an adjustable air bladder that acts like a spring to carry extra weight. With this type of shock, air can be added on an “as needed” basis when hauling extra weight.

Shocks and struts are generally replaced in pairs — though this isn’t absolutely necessary if only one shock or strut is leaking or has suffered damage at a low mileage.

Most struts require a fair amount of suspension disassembly. In addition, the wheels should be realigned after replacing a strut. For this reason, you’re probably better off letting a professional replace your struts.

A strut is basically a shock absorber mounted inside a coil spring. Struts perform two jobs: They provide a dampening function like shock absorbers, and they provide structural support for the vehicle suspension. That means struts deliver a bit more than shock absorbers, which don’t support vehicle weight — they only control the speed at which weight is transferred in a car, not the weight itself.

Because shocks and struts have so much to do with the handling of a car, they can be considered critical safety features. Worn shocks and struts can allow excessive vehicle-weight transfer from side to side and front to back. This reduces the tire’s ability to grip the road, as well as handling and braking performance. 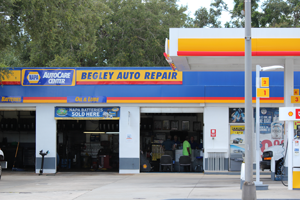 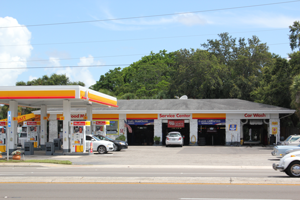